From Wikipedia, the free encyclopedia
For other uses, see thunderbird (disambiguation).

The thunderbird is a legendary creature in certain North American indigenous peoples' history and culture. It is considered a supernatural being of power and strength. It is especially important, and frequently depicted, in the art, songs and oral histories of many Pacific Northwest Coast cultures, but is also found in various forms among some peoples of the American Southwest, East Coast of the United States, Great Lakes, and Great Plains.

In Algonquian mythology, the thunderbird controls the upper world while the underworld is controlled by the underwater panther or Great Horned Serpent. The thunderbird throws lightning at the underwater creatures and creates thunder by flapping its wings.[1] Thunderbirds in this tradition are commonly depicted as having an X-shaped appearance. This varies between a simple X to recognizable birds.[1] The X-shaped thunderbird is often used to depict the thunderbird with its wings alongside its body and the head facing forwards instead of in profile.[2] 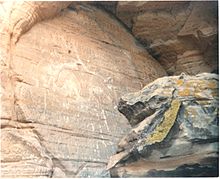 The Menominee of Northern Wisconsin tell of a great mountain that floats in the western sky on which dwell the thunderbirds. They control the rain and hail and delight in fighting and deeds of greatness. They are the enemies of the great horned snakes - the Misikinubik - and have prevented these from overrunning the earth and devouring mankind. They are messengers of the Great Sun himself.[3] 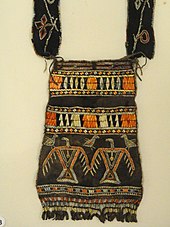 The Ojibwe version of the myth states that the thunderbirds were created by Nanabozho for the purpose of fighting the underwater spirits. They were also used to punish humans who broke moral rules. The thunderbirds lived in the four directions and arrived with the other birds in the springtime. In the fall they migrated south after the ending of the underwater spirits' most dangerous season.[4]

Winnebago tradition states that a man who has a vision of a thunderbird during a solitary fast will become a war chief.[5]