From Wikipedia, the free encyclopedia

Ancient Hindu wars are the battles described in the Hindu texts of ancient India. These battles depict great heroes, demons, celestial weapons and beings, and the supernatural.[1]

While no Hindu epic or scripture fails to describe the horrors of war and its fallout, major wars are fought with the purpose of upholding the Dharma (righteousness that brings prosperity to humanity) over Adharma(wickedness that causes humanity to suffer). The purpose of the wars is often to eliminate demonic beings or lords and rulers who pursue war want only for ambition (wicked wishes) and domination (for worldly pleasures). Hindu teachings prescribe war as the final option, to be employed only after all peaceful methods are exhausted. But when this time comes, war is taught to be a matter of great personal and social importance, where every man who belongs to the warrior caste must do his duty, exemplifying courage, honor, and fearsome prowess against all odds and even at the cost of his life.

The major Hindu gods, including Brahma, Vishnu, and Shiva, often engage in war, either in the form of Avatars or in their true form. They and many Hindu heroes use astra – celestial weapons with fearsome supernatural power – to aid them in battle.

The Battle of Kurukshetra, fought between the Kauravas and the Pandavas, recorded in the Mahabharata.

The central battle in the Vedas is between Indra and Vrtra, and the defeat of the demon Vrtra leads to the liberation of rivers, cattle and Ushas (dawn/light). While this battle does reinforce the timeless good v/s evil theme, close examination of various hymns and verses in the Rig Veda suggest this might have been an allegorical account of the end of the last ice age in the Himalayan glacial system.[2]

Another important battle is the historic Battle of the Ten Kings, alluded to in the Rigveda, in which the Tritsu clan, led by Sudas, defeat the Puru confederation of ten Indo Aryan clans.[3]

The perennial battle between the Devas and Asuras is undertaken over the dominion of the three worlds: Svarga, Bhumi and Patala, or Heaven, Earth and the Nether worlds. Both races are technically equal, possessors of great religious and martial powers, but the Devas are committed to the worship of the Supreme Being and the practice of virtue. The Asuras have atheistic and devious tendencies that grow over time. The divide is the greatest in the Kali Yuga, the final age.[4]

He is also known as Guru Brihaspati.

The end of the world[edit]

The epic story of Ramayana was adopted by several cultures across Asia. Shown here is a Thaihistoric artwork depicting the battle which took place between Rama and Ravana.

Levels of Warrior Excellence as per Bhishma from Mahabharata[edit]

As per Bhishma in Mahabaratha at the tale of Rathas and Maharathas there are only 3 types of warriors. They are Rathas, Atirathas and Maharathas. He classified every warrior in both sides of the army as per his judgement and knowledge of the science of weapons. According to him the highest level of a warrior is Maharathi and does not mention about the concept of Atimaharathi or Mahamaharathi.If we go by authentic scripture the highest class of a warrior is Maharathi.[19]

Shakti is the Supreme God in Shaktism Sect of Hinduism. Both a Supreme Being and an energy that is considered to be the source of all works of creation, preservation and destruction, Adi Parashakti is the mother of Trimurti, the universe and all of creation. She took many incarnations to fight with demons, including Parvati, wife of Shiva,[21] the complete avatar of Shakti herself, according to the Devi Gita and Durga Saptashati, the main scriptures for Shakti worshipers. As the goddess Parvati, she is considered to be the most powerful of all deities.[22]

Sometimes, the gods worship Parvati, who came before them in different avatars:

Apart from Parvati, there are some demons who were killed by Laksmi's incarnation. One example is Muru.[22][23]

Shakti is usually depicted as having the weapons of all the gods, even the Trimurti. She holds the trident of Shiva, the Chakra of Vishnu, the Vajra of Indra, the Gada of Yamaraaj. It indicates that she is the one who actually having all kinds of powers. It is she from whom strength arose. It is she from whom all powers of nondimensional formless GOD (Not talking about Brahma, Vishnu or Shiva) is vested. She is all powerful. All in one and one in all too.

Mahadeva literally means "Highest of all gods". He is the Supreme God in Shaivism sect of Hinduism. He is the Supreme God without any starting or end. Shiva is also known as Maheshvar, "the great Lord", Mahadeva, the great God, Shambhu, Hara, Pinakadhrik, "bearer of the Pinaka" and Mrityunjaya, "conqueror of death". He is the spouse of Shakti. He also is represented by Mahakala and Bhairava. Shiva is often pictured holding the damaru, an hourglass-shaped drum, along with his trishula, a trident-staff. His usual mantra is Om Namah Shivaya.[24] Lord Shiva is also considered as the God Of Gods. The existence which represents infinity itself.He is the supreme masculine divinity in this universe and is lord of the three worlds (Vishwanath) and is second to none in wrath and power.

The Lord Destroyer, Sarvaripati Shiva is one of the most fearsome manifestation of the Supreme God. Assigned with destroying all of the universe at the end of time, Shiva is one of the most fearsome warriors and unconquerable. Tandava is the dance of the Destroyer, which He performs over the body of a demon. Shiva employs his power to kill the Asura Tripura, destroying the flying three cities of Tripura. In battle, Shiva and his Avatars deploy formidable weapons controlled by him. Some of these are:

Vishnu, the Inconceivable Supreme, is the Supreme God in Vaishnavism sect of Hinduism . "Vishnu" means "all pervading" supreme being, the source of everything.In the Vishnu Sahasranama he is called Paramatman or Parameshwara(the highest form of God), and is periodically reborn as an Avatar upon earth in order to destroy evil and bring deliverance to the pious. He is also the refuge of the Devas in their battles against Asuras. The most martial Avatars include Matsya, Kurma, Varaha, Narasimha, Mohini, Vamana, Parshurama, Rama, Krishna, Kalki. He is also considered to be the first God, 'Adideva'. He is beyond birth, death, time. He is Beyond all. In battle, the Avatars of Vishnu are aided by a variety of astra or celestial weapons. His two human avatars, Parashuram and Rama were fearsome warriors and possessed many celestial weapons that accompany the past times of Vishnu. Sri Krishna also used a few of these weapons in Mahabharata.These include: 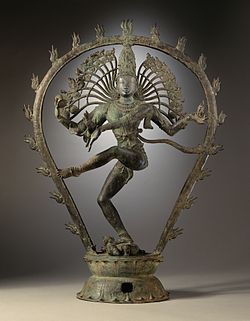 11th-century statue of Shiva performing the dance of destruction.

An astra is a weapon that is to be hurled at an enemy. Examples include arrows from bows. A shastra is a personal weapon, like swords and maces, that must be constantly operated by the warrior.

The three potential astras are Vaishnavastra, Pashupatastra and Brahmanda astra. However, these astras cannot harm four principle gods i.e. Brahma, Vishnu, Shiva, and Devi as they are the supreme manifestation of the divine. Especially, these astras cannot harm Vishnu, the greatest of all gods, Shiva, the god of gods and the destroyer himself, and Shakti, the original energy behind all astras. With these five gods, the astras also can not harm Hanuman, the son of god vayu, as he obtained vardanas (boons) from several gods.